NWRMA Board Concludes Tour to the South and the East 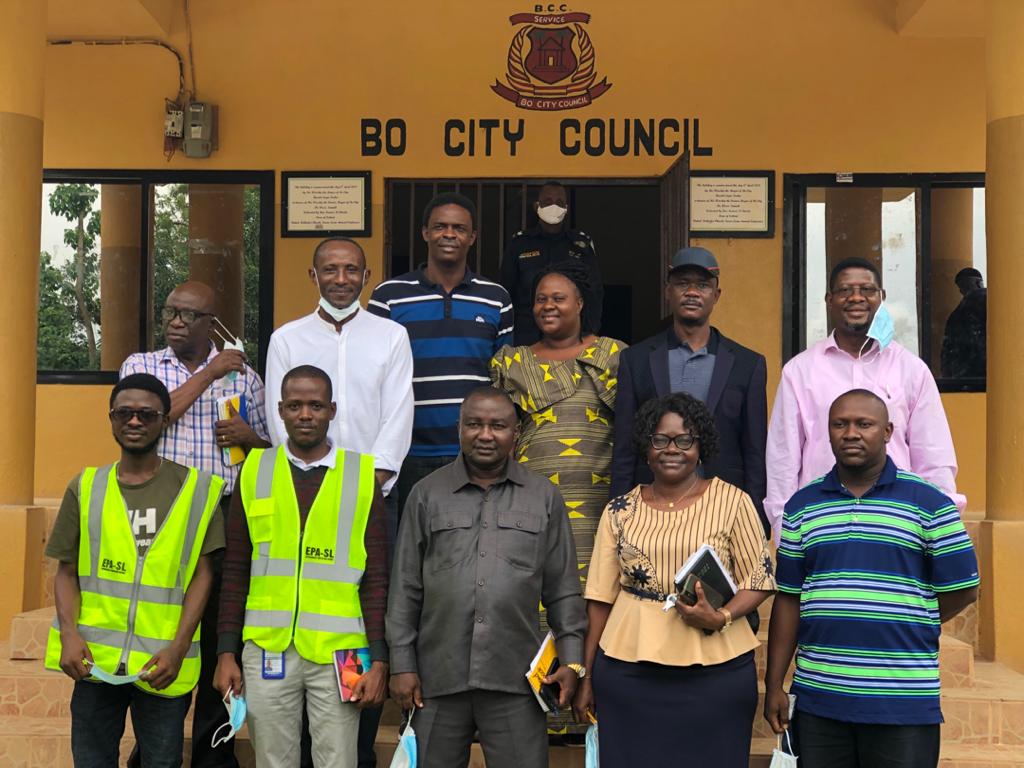 Board members from the National Water Resources Management Agency (NWRMA) have concluded a four-day tour of key stakeholders and critical infrastructure in the Southern and Eastern Regions.

The visit was the second part of a nationwide tour, which started in April with a visit of same nature to key stakeholders and installed hydrological monitoring stations the Northern Region.

In a meeting with Bo City Council authorities, The Chief Administrator, Madam Veronica Fortune welcomed the Board, adding that their visit is a step in the right direction to strengthen the existing relationship between the Board and the Council, as they plan together on the protection of the Kortibuma spring source, and other future projects.

The Board Chairman, Mr. Ansumana Swarray expressed his appreciation for the warm welcome, and explained that the Board comprises sixteen representatives from different MDAs and civil society in fields that are related to, and are important in the protection of water resources in the country, which are presently hugely endangered.

We are here to understand ourselves and learn from the Bo City Council and other partners and to ensure strong interaction especially as we establish regional offices in Bo and other regional headquarter towns. He spoke.

The Board Member representing the Ministry of Energy, Mr. Raymond Gbetuwa said water is very essential to the generation of energy, and the Minister of Energy has stressed the need to protect water resources if we are to achieve energy sustainability; while Environment Protection Agency representative in the Board, Mr. Emmanuel T. Nyakah, said water protection is very fundamental in the management of the environment and other natural resources. He mentioned the need to expand beyond regional offices and expand to basin areas.

Deputy Director General of the National Minerals Agency, Dr. Claude Anderson, said they support the work of the Agency as water protection is not only an environmental issue, but it is also a security issue. “NMA is committed to ensuring that we protect our water resources from over-abstraction, and also exploring smart-mining solutions with both large-scale and artisanal miners”.

Responding to the Statements, His Worship the Deputy Mayor of Bo City Council, David S. N. Smart said when God created the world with all its natural resources, he puts it in the custody of humans to manage. He said it is irresponsible for humans to mismanage the resources, and then ask God to provide for them. He said

“As drivers of development, water is very essential to the prosperity of our people and our city. As a council, we are committed to rolling out whatever decision and implementation towards the protection of water sources within the city. The decision to have regional offices is very creditable as it brings your operation closer to the people. It is necessary that present water users do not create problem for other water users. Water as a resource contains a lot of other resources that are important to our economy. If we do not handle it, we are at a loss. It bothers also on our health, our livelihood and other aspects of life”.

He added. His Worship also mentioned that embankments and other human encroachments have been very costly to the council’s effort to protect wetland resources, as this year alone, the City has spent more than Le70M to clear water ways, which is a very uncomfortable situation for the council.

The Board Chairman furthered that wetland encroachment is a national crisis, and it is of interest to the Agency. “Everybody wants to have a dwelling, but it sometimes threatens water resources. It is a security issue, and it is relevant that we bring the National Disaster Management Agency on board to properly address water-related environmental disasters”. He said.

The National Water Resources Management Agency (NWRMA) was formed by Act No. 5 of 2017. It was one of the recommendations of the National Water and Sanitation Policy of 2010. The Agency has broad functions of regulating, utilizing, protecting, developing, conserving, control, and management of water resources in Sierra Leone.