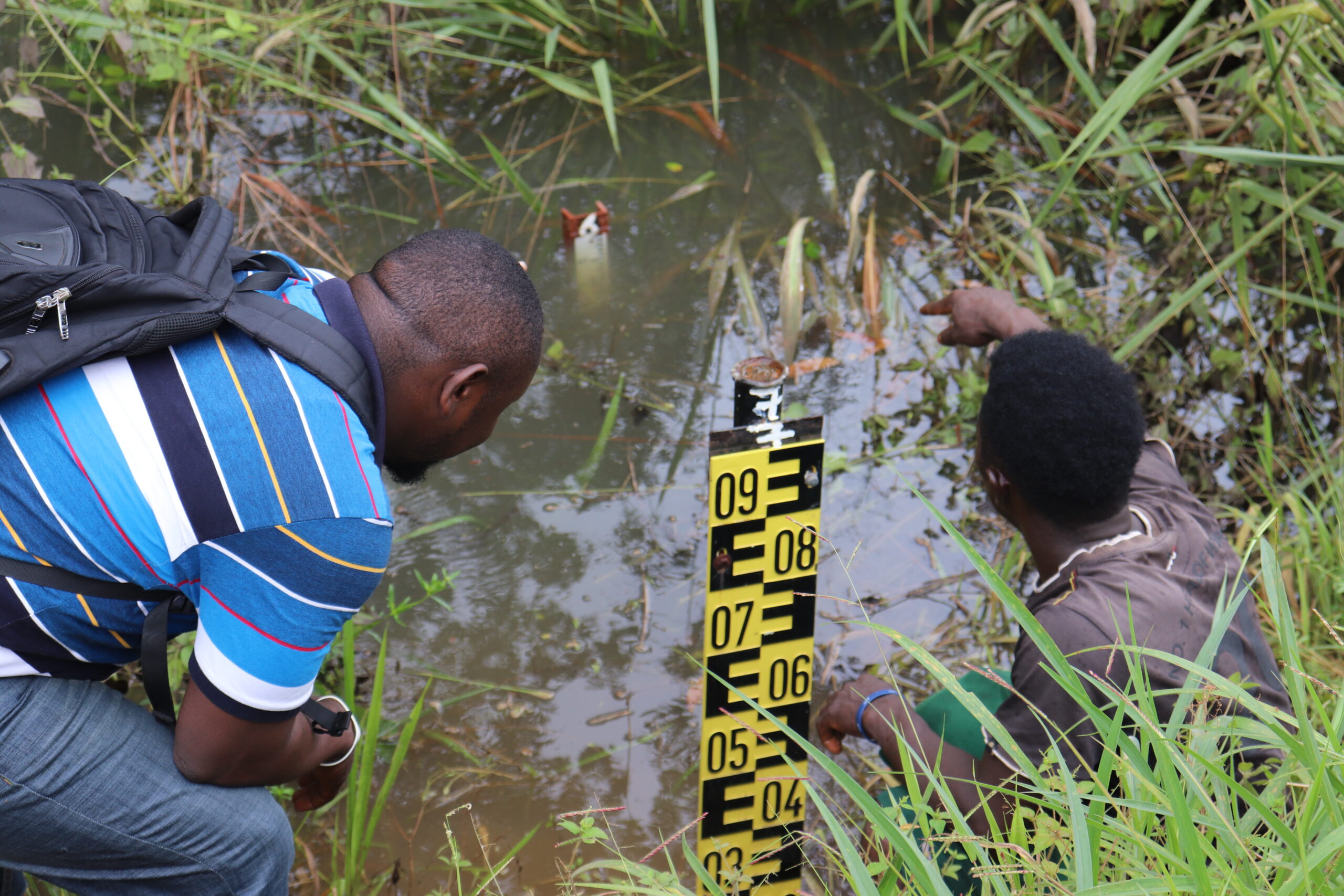 Data is very critical to protect, regulate, and manage Sierra Leone’s water Resources. Correct data inform as to where the high tides are, and what the characteristics have been like over the years. Its collection, processing, interpretation, and proper use have to be close to precise, if not precise; for it could inform critical scientific, security, economic, social, political, and/or environmental, decisions.

Whether a river is flooding somewhere, or a well is drying up in another place, we rely on data champions who despite their everyday busy schedules, check water levels three times a day (7:00am, 2:00pm and 6:00pm) to ensure that we do not miss a tide. They are community volunteers known as Staff gauge readers.

On the banks of many of our big rivers in Sierra Leone are one-meter-long yellow and black flat vertical metal plates, used to record river levels. These vertical plates are called staff gauges, and they serve as backup data collection plan to automatic hydrological stations, should technology fail. Staff gauge readers manually record water levels three times a day, and then text the result to experts in Freetown.

Momodu is a fisherman in Konshow, Bombail District. In the morning, he goes to record a reading on the staff gauge. By 2pm when he comes from the mosque for afternoon prayers, he goes again for the second reading; and takes the third reading before he goes to sea in the evening. Momodu is not alone. He shares this task with Abu, a farmer. They take turns in doing it and complement each other.

“I like doing it. I was told that this my small task is very important in protecting my community water resources. I was born here; I feel responsible to help protect the river because it is my own office.” He stated with a smile.

Theare are approximately 54 Momodus and Abus across who help collect water level data, thereby complementing the automatic hydrological stations. Automatic hydrological stations are state-of-the-earth equipment that record surface and ground water levels in many parts of the country, and then send the data in real-time, to the Agency’s servers in Freetown. On some not-so-good days, these stations can fail either because the solar power is tampered with, or when the internet signal is down.

The National Water Resources Management Agency has made a countrywide tour to boost the morale of volunteer staff gauge readers, and to assess the state of its critical infrastructure in different parts of the country. The tour was to first appreciate staff gauge readers and understand the present state of automatic hydrological stations around the country.

The team visited Kambia, Karine, Bombali, Tonkolili, Koinadugu, Bo, Moyamba, Pujehun, Kailahun, Kenema and Kono districts, where they had the opportunity to also interface with the communities which host the automatic stations and staff gauge readers.

During the visit, the Agency evaluated recorded data in exercise books, presented volunteers/staff gauge readers with their quarterly stipends, and assessed the state of their working tools-exercise books, and mobile phones.

Speaking at Badala village in Koinadugu District, the Agency’s Director-General, Junisa P. Bangali Esq encouraged the community to own the stations, as communities have a huge role to play in protecting the stations. He explained the importance of hydrological data collection, and why community volunteers are very important in data collection.

“The data we gather will inform government and its partners who would want to undertake any water-related endeavor in your communities. Without the precise data, it would be difficult for them to start. We hope you would encourage the volunteers to keep up the good work.” DG Bangali said.

Chief Fengai Nyaama of Yima village in Kono District welcomed the team heartily and expressed his hope that their work in his village would yield the expected results. He said when he was a youth, the Yima River was quite flourishing that in some rainy seasons, they would move the people living by the banks to high ground for fear of flooding. However, as the years go by, many activities upstream like mining, deforestation, and damming have left his village people with very little water to use, with contamination and disease outbreak. He called on the authorities to investigate their situation and restore their once-health river.

The Agency continues to hugely rely on data collected in these riverine communities to effectively strategise the protection, regulation and protection of the country’s water resources; and community participation in its work as prescribed by the Integrated Water Resources Management principle.