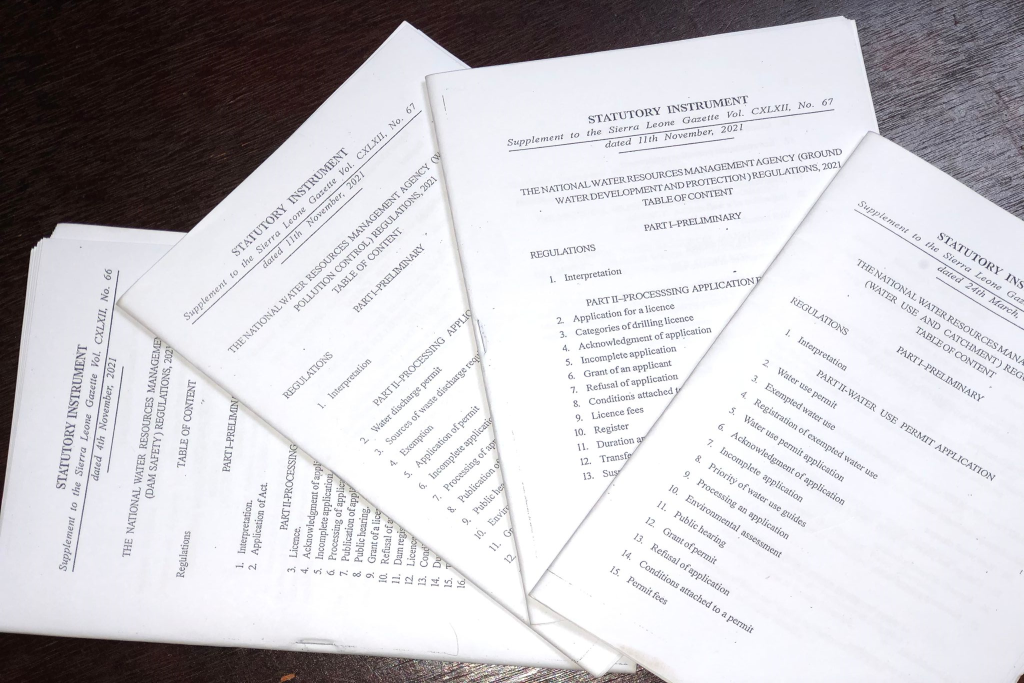 An Act of Parliament established the National Water Resources Management Agency (NWRMA) in 2017. The Agency is responsible for managing and protecting water resources, granting water rights to competing users, formulating regulatory measures, and collecting and sharing hydrological data, with the view to maintaining the water table and controlling water pollution. The water resources include inland (both surface and groundwater), transboundary, and the international territorial water resource in Sierra Leone.

It is already an established fact that water insecurity is a global and sustainable development goal challenge, mainly caused by climate impacts and anthropogenic (human) activities: unplanned. urbanization, unregulated agricultural activities, mining, and deforestation, to name a few. Exacerbating the problem has been the absence of an enabling environment for regulating these activities.

Water has also been exemplified in Sustainable Development Goal six (6), referring to access to clean water and sanitation with a target to succeed by 2030. In the past two decades in Sierra Leone, water insecurity has been one of the greatest threats to human existence owing to limited availability and thus limited supply of water. To change the trajectory, Sierra Leone has joined the international community in the fight against water insecurity by developing institutional and legal frameworks.

Not long after the Agency started operations in January 2019, it was discovered that though NWRMA Act established the law which should set up the agency and give it a mandate, additional legislation was required to interpret the laws. With support from the United Nations Development Programme (UNDP), a consultant was hired, to develop four (4) regulations:  Water Use and Catchment Regulations, Water Pollution (Control) Regulations, Groundwater Development and Protection Regulations, and Dam Safety Regulations,

Parliament in June certified the regulations, after a maturity period of twenty-one days during which it was tabled in the well of Parliament, as provided for under Chapter XII Section 170(7) of the 1991 Constitution of Sierra Leone. This goes a long way in boosting water resources management in Sierra Leone.

The Regulations came about after a rigid nationwide consultation with various players in the Water, Sanitation, and Hygiene (WASH), local authorities, water users, etc. with the sole aim of gathering information from the public as to the most efficient recommendations for the development of the law on water resources management.

The Water Use and Catchment Regulation focuses on appropriately protecting the country’s surface water and catchments, and its abstraction, through issuing a water use permit. The Groundwater Development and Protection Regulation focus on protecting groundwater sources, especially for borehole well construction, by giving a borehole/well drilling license. The Dam Safety Regulation seeks to make dam construction and management safe by awarding a dam safety license, and setting standards that dams must meet. The fourth Regulation- the Water Pollution Control Regulations, aims to reduce the pollution rate of Sierra Leone’s water resources through the granting of a waste discharge license. All these Regulations primarily focus on how the country can use the water resources to enhance its economic potential and protect its water resources in order to meet sustainable development goals. They will further protect current and future generations from what would be referred to as water insecurity and its associated feedback.

In presenting the Regulations to lawmakers for consideration, the Minister of Water Resources, Ing. Philip Karimu Lansana, emphasized that Sierra Leone is at a crossroads to take a significant step in developing the water resources management protection law. The Minister further accentuated that approval of the regulations by Parliament will go a long way to address the country’s perennial water issues.

In an exclusive interview, the Director-General for the Agency, Junisa Patrick Bangali Esq, stated that the misuse of water resources with impunity will now be a thing of the past. He further said that the certification of maturity by Parliament of these Regulations would aid the Agency in clamping down on watershed catchment degradation and illegal abstraction of water resources. He, therefore, calls on the general public to comply with these Regulations accordingly.

In the coming days, the Regulations will be disseminated to different parts of the country for proper understanding and thus aid compliance, which is the ultimate goal of the legal framework.