How Drama Is Raising the Consciousness Around Water Resources Management 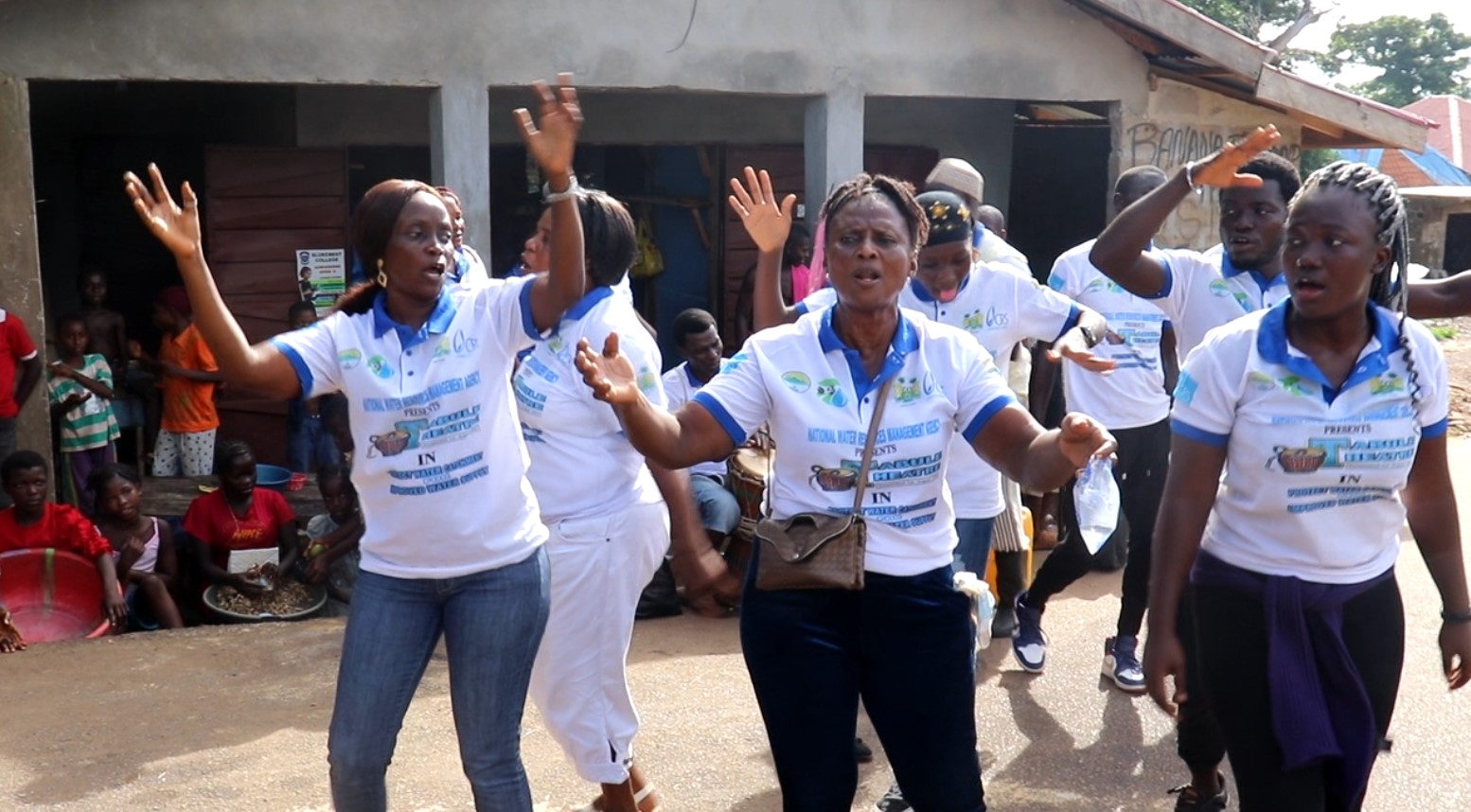 When people hear the sound of the African drum, they stop in their tracks. It goes by a lot of names around Sierra Leone, but the two most prominent are Bata and Goombay, and Taboule in some parts of the country. It has always succeeded in bringing people together, serenading them with rich local rhythms.

The African drum is present in so many occasions like worship services, weddings, funerals, parties, and even drama.

Taboule Cultural Theatre is a drama group in Sierra Leone. The name is derived from a certain drum that calls people to attention. As its name implies, they specialize in using drama to raise awareness around social and other issues, as a tool of Social and Behavior change. The National Water Resources Management Agency in collaboration with Catholic Relief Services in Sierra Leone contacted the group to raise awareness around issues like deforestation, land grabbing, settling in disaster-prone areas, stone mining, and many more, which are thematic areas within the Western Area Peninsula Water Fund.

The team commenced their tour of communities on 29th of July 2022, starting with Tombo, Grafton, Hastings, Mongegba, and River No.2, acting out skits. The first start with the beating of the drums to call public attention, then they go into performing a skit when they have an appreciable audience. The campaign engages community stakeholders on the dangers of deforestation and its effect on water supply and other vital ecosystem services and also informed them about the dangers of catchment degradation and the benefits of the water fund.

Ing. Ken Tommy is the Technical Head of Catchment Protection in the Western Area Peninsula Water Fund Project. He said they decided on employing the services of a drama group because drama has a track record of achieving desired outcomes in raising awareness.

“People see skits about the dangers of catchment degradation being acted out and they identify with these struggles in their different communities. So, the skits are a wake-up call to remind people that these dangers are real.”

NWRMA’s Director of Legal Regulations and Outreach, Abubakarr Iscandri Conteh Esq. said in one of the awareness-raising sessions that laws to protect and regulate water resources or any other natural resource are informed by rigorous technical studies, and not made to inconvenient citizens, but because they want to sustainably manage these resources in a manner that caters to present and future generations.

“Community participation cannot be overstated, as communities are the first to suffer when water resources dry up, and they are the first responders to any water emergency. Therefore, be active first responders in addressing issues that threaten your water sources and abide by the existing laws set to protect these sources. That way, your future generations can benefit from it.” Director said

Sheikh Umar Turay, Chief Imam and elder of the Tombo community said their water source, has been with them since he was a child, and the community depends on it for all their water needs. He said to not manage it well would be to expose the community to many dangers like disease outbreaks, water shortage, malnutrition, socioeconomic and even conflict.

Foday M. Turay, a retired teacher in one of the communities said the skits by the drama group really brought out the dangers posed by not protecting their water source and has given him a renewed commitment to work harder in protecting the water sources.